Toying with a duff idea. Aware of a looming exhibition in September, devoted to still-lifes, I was, in my usual New Year blues, devoid of ideas. My ‘Starts’ had deserted me. These began as a devotion to St. Art, and became my ‘Starts’ – an idea bank where anything lurks that either grabs my attention visually, or is interesting intellectually. This might be literary or scientific – the latter increasingly less so these days.

The visual Starts have never let me down before, and normally Nature provides all the stimulation I need. Well, it would, wouldn’t it, because nature is everything. I rather believe that there is no such thing as a purely ‘abstract’ painting, in the sense that it has no reference to human experience. Even a work that might loosely be said to be from the “Explosion in a paint factory” school obeys certain natural laws. Not understanding laws doesn’t mean they don’t exist, just that we don’t understand them.

Anyway, in the germination process, an image – either a photograph, drawing or another work of art – can set up a re-imagining of this in the studio; perhaps some natural phenomenon will spawn a re-creation. Or it might be the sight, maybe no more than a glimpse, of a person (usually female, but that’s a subject for another day) will set me off trying to recreate it with a live model. Other times it is a literary source, perhaps even the line of a poem, a lyric in a song, or an overheard remark, can set off the process.

However, the new year found me lagging. 2015 had been difficult (if I’m honest, most years seem to be difficult). I’d been concentrating on still-lifes and actually feeling quite relaxed, for it was months away and I already had a number of works – including some old ones which I was revisiting. But 2016 rolled in I felt increasingly bereft and a desperate need to be working. There was nothing there. The natural world seemed bleak and uninviting – it wasn’t of course but so it seemed at the time.

Mij, as so often happens, came to my rescue, suggesting some toys of my grand-daughter, Isabelle. This seemed a good idea. I rapidly set up a random composition of some chunky brightly painted wooden toys overseen by a knitted teddy bear to provide a bridge from inanimate to ‘figure’. This was January 3rd. Five weeks later after an increasingly perplexing struggle, I abandoned the idea.

Prove me wrong, why don’t you, but I can’t think of a good original painting which has children’s toys as its main jumping off point (not counting the purely illustrative of course). Why should this be? Eventually, after much head scratching, I came to this conclusion, which I offer for your consideration and possible amusement.

In a nutshell: just as much as a child is not to be messed or interfered with, no more perhaps are its most precious possessions. I found it impossible to wrestle and shape these precious objects into my own image. It became a violation.

Why then do not Chaim Soutine’s paintings of actual children seem ‘wrong’? And indeed, paintings of adults, distorted and wrangled to some perceived identification of character or self-image, why are not they also ‘beyond the pale’? 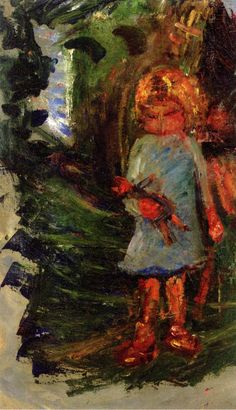 To me, there is something inviolate about a child’s world. All my interpretations just got farther away from the essence, from the charm of the objects. They refused to be manipulated into something else, something adult. The last of my ‘finished’ attempts, when cropped into abstracted images, weren’t too bad but nothing like what I had wanted.

This idea might have been ‘duff’ in my execution of it, but it gave me much to think about. I wonder if it has you?

These are just some details of the failed painting. 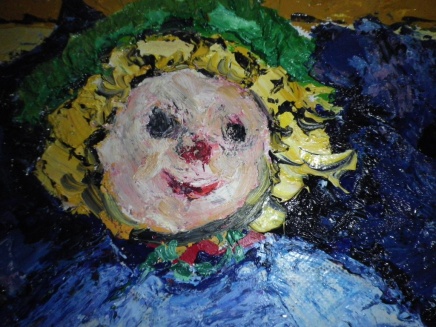 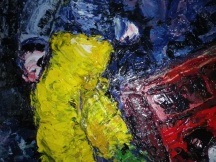 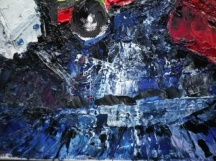 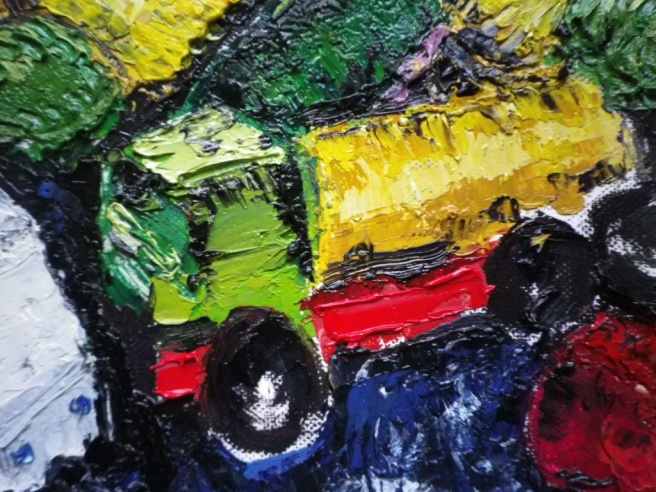