Gauguin with Vincent Cassel in the title role

Went to see this film at my lovely local Arts Centre. It was a pleasant concoction but if you hadn’t been told it was about the artist Paul Gauguin on Tahiti and came to it cold, you might be excused for thinking it was just another love(-triangle but not really) drama set in an exotic location, bearing as little resemblance to the life of a painter (of static images) as only a cinematographer could make. It deals with Paul Gauguin’s first visit to Polynesia (you’ll be amazed his health stood up to a second!).  It was the second when he did most of the great paintings for which he is justly famous.

Having read David Sweetman’s 600 page ‘A complete life’ of Gauguin (Hodder & Stoughton, 1995), it feels these are two very different people. That’s fine – it’s a film – but why hang it on a famous painter if not to attract another audience. Sweetman gave every impression of hating Gauguin, but that’s another story. The film is certainly beautiful, thanks to the location more than to the characterisations, and is aided by a lovely mellow score. Energetically edited and well acted, even if the titular role, played by Vincent Cassel, is one-dimensional. Without Cassel the film would be nothing. Apart from some sketching, carving and minimal painting, there was little about art or Gauguin’s serious philosophy of it – which deserved attention.

On a more mundane level, his amorous exploits (often with under-age girls, one of whom he ‘married’ even though he was already married to Mette back home) and syphilis were ignored, as were his long-running disputes with the church and authority in general. A doctor was invented to befriend him, rather in the Dr Gachet mould, but I can find no authority for this. His main Western friend was a Lieutenant Jénot. I don’t think he ever rode a horse up into the mountains or lived as a castaway, though he looked very much like one. In actual fact, he caught a coach out of town!

I yearn for a film which looks at a real painter’s life, but it might be tedious viewing to most people, a bit like watching an author write a book. The nearest I’ve seen to it is ‘Girl with a Pearl Earring’ which revealed the difficulties in Vermeer’s life, trying to paint in a domestic situation. At least Edouard Deluc’s film was sympathetic to the subject and, thankfully, avoided concentration on fornication, drinking and brawling – which, as we all know, are the staple of an artist’s life!

Gauguin crept into the corner an old unsuccessful painting (below) but the rest got painted over (here). 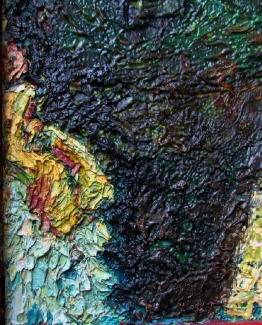