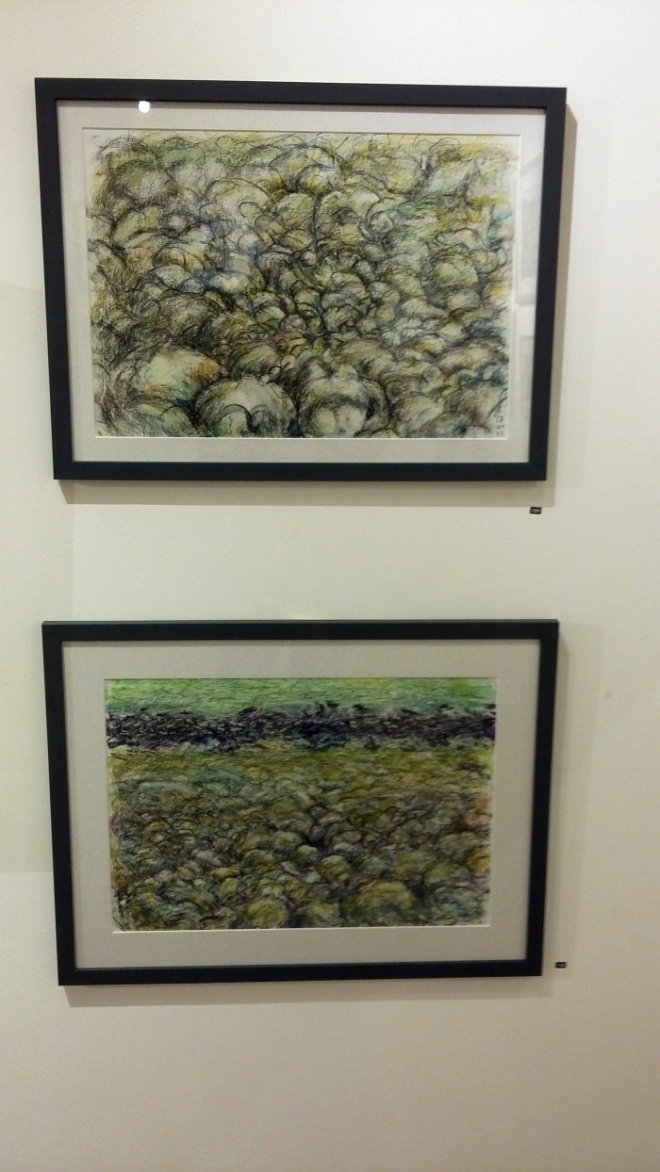 I listened to advice (surprise, as it may be to some, I do sometimes) and Phil my excellent framer gave one of the pebble studies a bigger ‘more generous’ mount; I’d been told my original ones were “too mean”. The two different versions are currently on show at the Burton at Bideford Gallery. Pop along if you are in North Devon; admission is free and there is lots of really good art (I never say that lightly).

Both are available at a measly £145 despite difference in framing, but it’s the art work that’s important, isn’t it?  I feel pleased with this series and also that I’ve broken new ground.  The remainder of the series will go in Recent Work soon – I’ll send a note when that is done (a few test ones are actually up there now, have a look).

An exhibition of my flower paintings is at RHS Rosemoor from 1st September to 7th October. This is the second collaboration with brilliant ceramicist Eilean Eland. And of course the Rosemoor gardens are always a delight.

Additionally, I’ve been occupied since May with a personal and rather difficult commission.  In fact a painting for a friend which I was most anxious to get ‘right’.  It was difficult in the sense that it is small (A5), a nude figure and I needed to please both my friend and of course myself.  It turned out to be one of the hardest paintings I’ve ever done but I won’t be able to show it  because it is private.

It’s not just this that has been weighing heavily on my mind it is my writing and conservation work too. I’ve published a few recent poems here https://richardmeyer.co.uk/index.php/writing/poems.  I’m finding great release in poetry these days: enabling me to convey observations and reflections in a succinct form which is I hope both exciting and original.

Also finishing my third novel revelling in the fertile imagination of children.  Although stigmatised as ‘children’s books’ they are actually novels about children.  So-called  ‘children’s books’ are the only books categorised by perceived readership not by content: a source of irritation and mystification.  I ask you, are ‘Lord of the Flies’, ‘Picnic at Hanging Rock’, ‘His Dark Materials’, ‘Lord of the Rings’, ‘David Copperfield’, ‘A High Wind in Jamaica’, to name just a few, ‘children’s books’?   I would say not; they are literature which feature children – not the same thing at all.  Maybe you could add your own titles here, and we could explore this subject again more fully.

Finally, on Saturday 18th I was in Exeter taking part in a very noisy public meeting and march through Exeter city centre.  You won’t be surprised to know it was about the appalling Badger cull here in the UK.  I’ve never before stood on a soapbox (in fact a public bench in a sort of ‘Speakers’ Corner) and addressed a crowd through a PA system.  I had 15 mins to summarise nearly 50 years of history) and think I did OK – but certainly no better; not sure that soapbox oratory is my thing.

I hope you may leave the odd comment, if only to show that you’ve read this far!